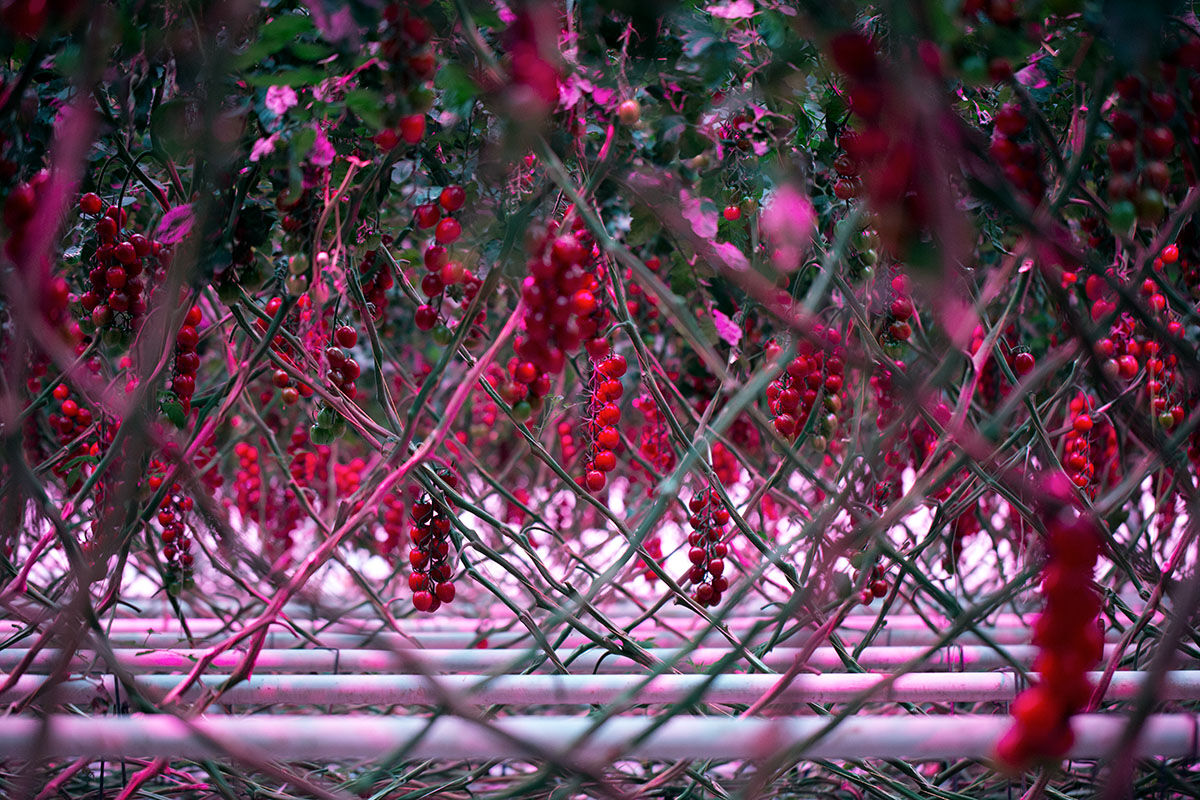 A more generative plant, 10 to 12 percent more production, and Brix measurements at summer levels all year round are the key results of a hybrid lighting trial at Belgian tomato grower Tom Lefevre with Hortipower.

The trial is being conducted at a 1.5-hectare site at Hortipower, one of Tomeco's production locations in Merksplas (BE). The water-cooled LED grow lights from Oreon allow Lefevre to illuminate his crops for even longer.

The hybrid lighting trial has now been ongoing for almost a year. “We’re really happy with the way it’s going," says Lefevre enthusiastically. “We grow varieties that are sensitive to blossom-end rot, and we want to screen more as part of our objective to reduce our impact on the environment and our surroundings. We also want to be able to offer sustainably grown, tasty tomatoes to our customers all year round.”

Lefevre has been lighting a 6.5-hectare area of tomatoes for the past four years, where he grows varieties such as San Marzano and mini plum vine tomatoes, at the request of his customers. These are mainly Belgian retailers (Delhaize, Carrefour and Colruyt), who purchase fresh packaged and unpackaged tomatoes every day. A number of foreign retailers are also supplied via the Hoogstraten auction.

Last year, some of the SON-T (HPS) lamps in a 1.5-hectare area were replaced with water-cooled LED grow lights from Oreon. Where initially 8 SON-T lamps were hung per 2 trellis there are now alternately 5 SON-T and 5 LED lamps with the same electrical power rating. That means 40% less electricity consumption in terms of lamps. “We decided to use 5 lamps per 8 m by 5 m lattice, of which 50% are LED and 50% SON-T. These produce a total of 225 µmol/m2/s. The lamps are used continuously in the winter. In the spring, we first switch off the SON-T, and until today (27 June 2019/ed.) we turn the LED lamps on each morning for a short while. If the natural light intensity exceeds 300 W/m2, we switch off the LED lamps. As soon as the light intensity goes back below this level, we turn the LED lamps back on."

Tasty tomatoes and healthier plants all year round

So far, the trial has resulted in a more generative plant with a shorter growing period, meaning tomatoes mature ten days faster and production is up by 10 to 12 percent. This concerns Volantis plum tomatoes. Even more important is the flavour, says Lefevre, “We measure the Brix values of our tomatoes every week so that we can monitor their flavour. We’ve recorded good Brix results with LED lamps, and we can even approach the same levels as in the summer. We’re therefore sure that using LEDs instead of natural light won’t compromise flavour. The LED installation also allows us to keep the plants in balance better, and maximise flavour.” He says that the tomatoes under hybrid lighting are not only more generative and productive, they are also healthier. “We’ve observed that the plants are healthier, so less sensitive to stress and more resistant to certain diseases. That means we can use fewer crop protection products."

"LED is undergoing a major evolution"

With regard to the blend of lighting and the hybrid system that Voshol installed, Lefevre relied on Oreon's advice. "LED is undergoing a major evolution. For example, new LED modules are now available on the market that are already 10% more efficient. We also need to identify the varieties that grow best under LED. We grow three types of plum tomatoes; the classic Romared, the San Marzano, and a mini plum tomato. Each variety reacts differently under LED or under a different cultivation system, so we have to carry out more research to find the ideal combination. For example, whether we should use 4 or 5 lights, depending on the variety. There’s still a long way to go."

According to Dick van Oorschot, technical advisor at Oreon, Oreon’s latest lamps deliver even more light output than the models used at Hortipower. “Hortipower used version 2.2, but version 3.0 is already available. LED lamps are becoming more and more efficient, as are the chips, which means that the cost per µmol continues to fall. That means switching to LED lighting is making more and more sense for many growers. We believe that LED lamps will ultimately produce more light than the current SON-T lamps. Growers using LED can generate more light output in the greenhouse with the same energy consumption. Growers can also illuminate more hectares using their current CHP capacities.”

The cooling water from the LED lighting can be used elsewhere in various ways. For example, Lefevre wants to use the cooling water to maintain the irrigation water at the right temperature in the winter, because the silos are outside. “It’s important to cool the system for various reasons. It extends the life of the LEDs, and you can conduct the heat in the greenhouse to outside or use it in other places in the greenhouse. That means the lighting can still be used in hotter weather.”

Van Oorschot believes that hybrid lighting is ideal for tomatoes: “SON-T lights create radiant heat that growers believe plants need. LEDs generate more light output without extra heat. This system works best when the process control is completely integrated in the computerised climate control, so that all incoming and outgoing temperature flows can be monitored and controlled.” Hybrid lighting is interesting for tomato growers, but can also benefit floriculture, soft fruit and leaf crops, says Van Oorschot. "The results with these crops are, without exception, positive."

Lefevre has found that his results outweigh the investment. “In our search for LED lighting, we looked at various suppliers, and ultimately opted for Oreon of the company’s water-cooled models. We believe water-cooling will extend the lifespan of lamps and increase their efficiency, which is important in the context of our sustainability objectives. Tomeco's ambition, which covers all our production companies, is to supply our customers all year round without interruption. We’re therefore constantly looking for new possibilities and better cultivation techniques, and LED lighting is certainly one of our priorities. This is an area we’d like to explore further, so that we can roll it out at our other companies."