”I could not believe the results, the basil showed such strength and resilience!" 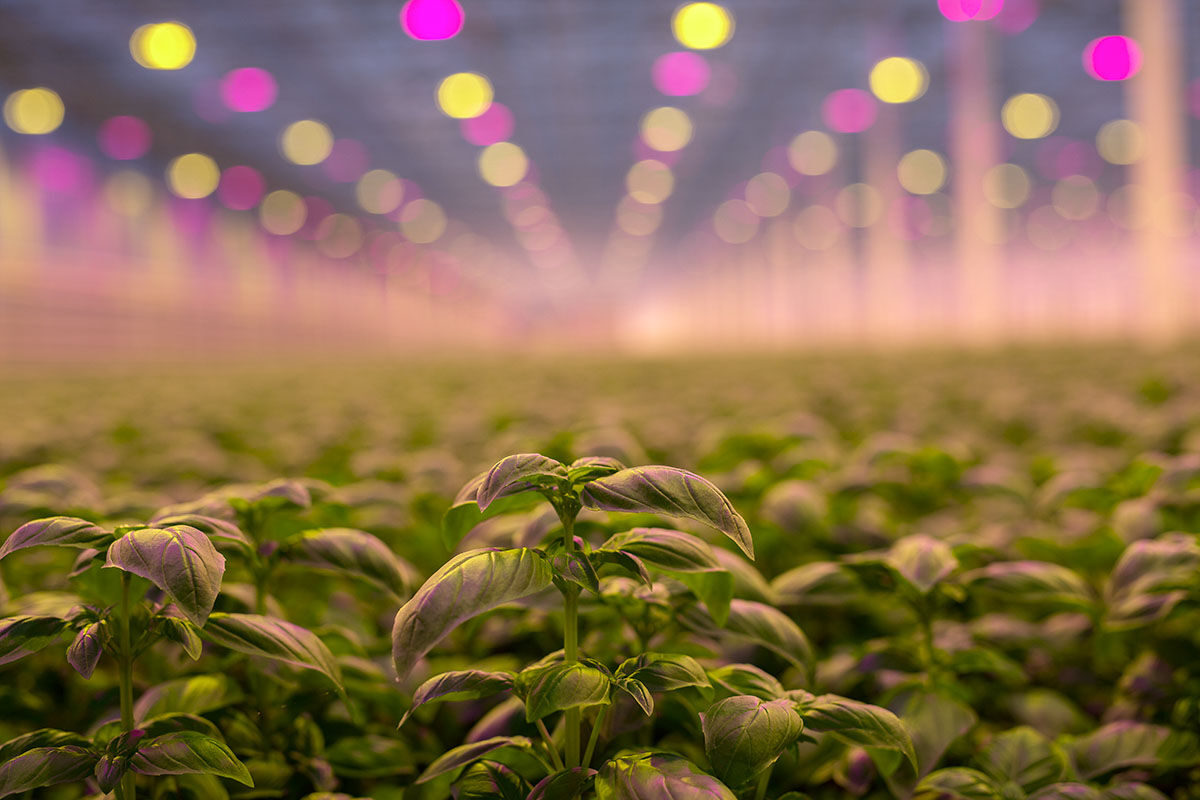 Christ and Jacqueline Monden of De Kruidenaer in Etten-Leur had a hybrid lighting method installed in their new high-tech greenhouse, in which they grow basil, just over a year ago. Until now, their experiences have nothing but positive: a higher production yield, better quality, a longer lifespan and improved plant resilience.

Last year, Christ Monden had a new 14,000 m2 greenhouse built with diffuse glazing, a humidifier and hybrid lighting for the cultivation of basil on water (hydroponics). The basil is grown in six 2,100 m2 containers, which Christ refers to as ‘ponds’. The young plants are started in this greenhouse as well. They are transplanted to ‘floaters’ with plant holes after 1 to 2 weeks. The ponds are located parallel to one another, without any aisles in between. As a result, optimum use is made of the available space.

On one side of the greenhouse, the floaters with the young plants are set to drift in the water and – after 3½ to 5 weeks – they are lifted out at the other side of the greenhouse for harvesting. This is a short cultivation cycle, thanks to the intensive lighting, which ensures a constant supply of fresh basil six days a week. In addition to basil, the Brabant-based nursery also grows 23 other types of herbs, lettuce (grown hydroponically) and sweet peppers (amounting to a total of 8.5 hectares of greenhouse cultivation and 23 hectares of open-field cultivation with tunnels) for the retail, food service and export industries.

In addition to diffuse daylight, the plants also receive artificial light provided by Oreon Grow Light (260 KVA) LED fixtures, in combination with Gavita SON-T (460 KVA) lighting, with a maximum output of 100 μmol/s (the output of the LED system alone is 50 μmol/s). The light fixtures are suspended above the crop in a chequerboard pattern. Their design (lighting plan) and the installation of the system were carried out by Voshol Warmte-Elektrotechniek. Oreon LED fixtures have been installed, among others, at lettuce grower Boer den Hoedt and Koppert Cress.

One of the unique features of the Oreon LED fixtures is its water cooling system. This has various advantages according to Jos Duijvesteijn of Voshol. ‘Basil likes warmth, but not too much. In this case, LED lighting is the ideal solution LED is composed of diodes, which get very hot at the back. Heat is, of course, detrimental to the useful life of electronic devices. Thanks to the cooling system, we can keep the temperature of the lamp between 35 and 45 degrees Celsius, thus substantially extending their useful life (L90 = 35,000 hours, ed.). The heat discharged through this process (50 degrees Celsius) is reused by De Kruidenaer – for heating the ponds, for example. This means that no energy is lost.’

Christ explains why he chose to install the Oreon LED fixtures: ‘They came out best in a test that was conducted prior to the construction of the greenhouse. The plants grew very uniformly and were super strong. In the end, we opted for 50% SON-T and 50% LED because basil can really use this extra heat. We can light the plants exclusively with SON-T, or exclusively with LED, or with both types of lighting. Thanks to the LED fixtures we can give the plants light for much longer, both in the morning and in the evening, particularly at this time of the year.’

The lighting is switched on as frequently as possible, up to a maximum of 20 hours per day. ‘Last year, I used more SON-T lighting than I had expected. The crop was able to tolerate the extra heat very well. We use SON-T exclusively or in combination with LED, but have not used exclusively LED all that often yet.’ Christ thinks that the LED fixtures were switched on for 2,000 hours last year. Thanks to the LEDs he can give his plants prolonged light and start earlier in the season – four to six weeks each season, he estimates.

The result after growing plants under hybrid lighting for one year is positive. We were able to produce the anticipated volumes, and the quality is better, says Christ. Additionally, judging from customer response, Christ noted that the plants have a longer lifespan. He also has to purchase less product in addition to what he grows in order to meet customer demand. ‘They prefer basil grown in the Netherlands, with a PlanetProof Hallmark (previously Milieukeur). We were able to get through last summer – with temperatures above 35 degrees Celsius – much better than I had anticipated.’

Christ is convinced that the LED lighting contributes to improved plant resilience: ‘During the tests, we noted stronger plans, with sturdier leaves and shorter internodes. The colour was better, too. I am sure that this gives the basil greater vigour. These results are also reflected in our crops. Basil is a highly demanding crop, a real “prima donna”. Things can be completely different from one day to the next.’

Although the investment in a new greenhouse ended up being much greater due to the purchase of the LED lighting fixtures, Christ and Jacqueline Monden are very satisfied about the results. ‘We grow almost all the basil ourselves, particularly in the season. What I am most satisfied about is the quality of the crop. We aim to grow the best basil in Europe. In about five years’ time we want to stop growing sweet peppers entirely. It has been going really well until now,’ he says with a wink that shows his marvellous feeling for understatement.

For which types of growers is hybrid lighting interesting? ‘The product range is becoming increasingly broad,’ says Jos Duijvesteijn of Voshol. ‘There are plenty of possibilities in the cultivation of herbs, particularly if heat is a problem. The same goes for growing lettuce. Hybrid lighting is really on the rise among tomato growers. We are currently rolling out the first projects, with LED top lighting in combination with SON-T. A gigantic advantage is that the LEDs will give you a much greater output, with a smaller capacity. This means that you can get more micromoles from the same capacity.

We are very enthusiastic about Oreon’s water-cooled fixtures. This product is stable, and has pretty much be reached the highest level in terms of engineering. Also, once it has been installed there is nothing you need to do. You can also generate a diversity of light patterns with LEDs, for the vegetative and generative growth of the crop. The latter still requires a lot of research, but I can certainly identify opportunities here.’