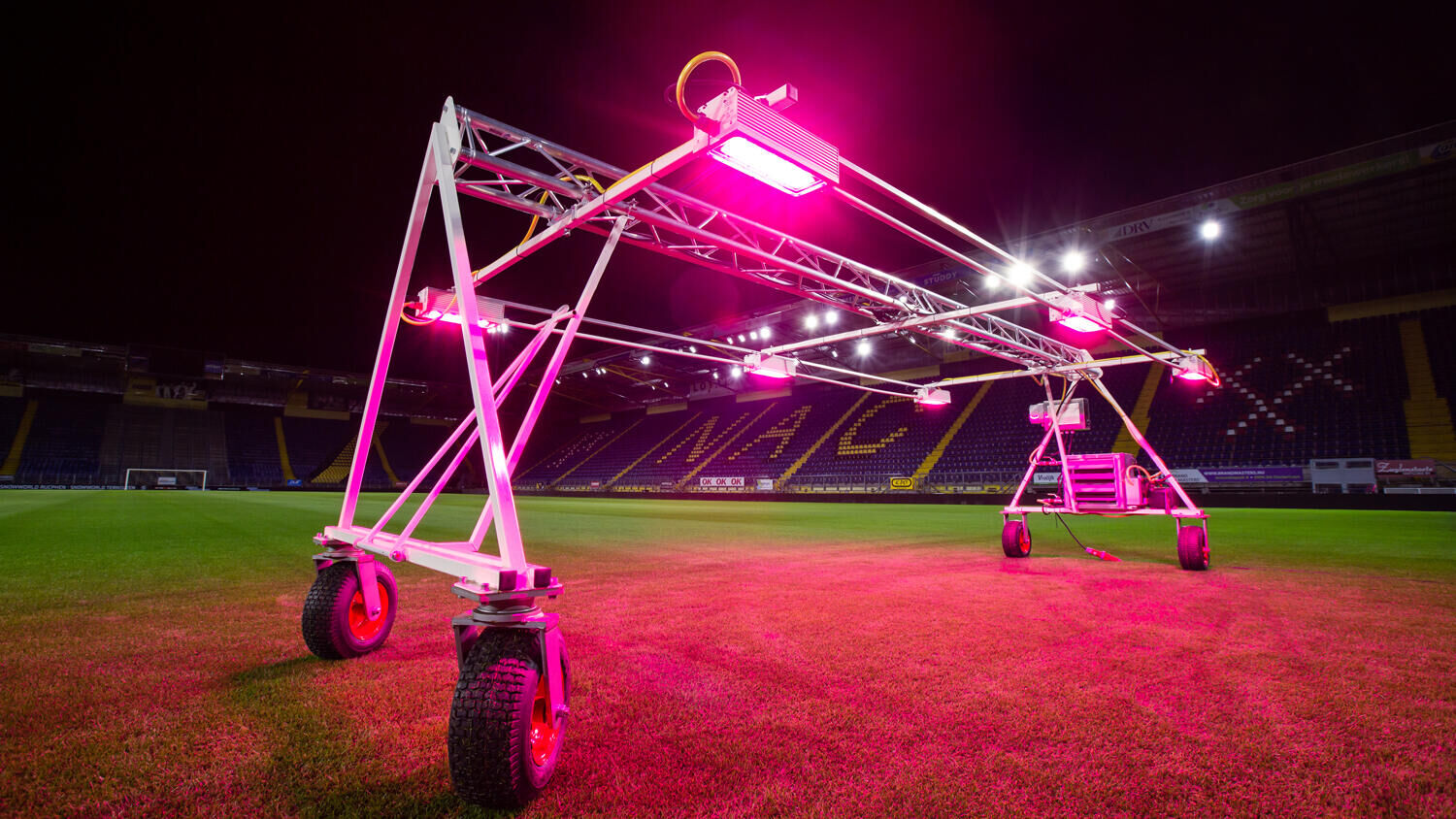 Mid-2019 Oreon started an extensive research at football club ‘NAC Breda’ on how LED light affects a grass playing surface in combination with the unique ability to apply extracted heat directly over the grass. In cooperation with Erwin Braspenning, owner of Hubra Fieldmanagement, Oreon tested this concept during the fall and winter season in a live stadium environment.

Oreon is an innovative developer and manufacturer of state-of-the-art LED assimilation lights. The LED grow lights of Oreon are widely used in the horticulture industry (e.g. lettuce, tomatoes, microgreens and strawberries) since 2007. Due to the unique water-cooling concept of the LED fixtures, the extracted heat produced by the LEDs, can be re-used and directed to the grass. This results in better and faster growth and the ability to illuminate the grass year-round.
Together with football club ‘NAC Breda’ and Hubra Fieldmanagement, Oreon researched the benefits of using water cooled LED lighting to improve growth of grass playing surfaces in combination with a unique heating system to improve temperature control and lowering energy costs.

Many professional sport clubs use artificial light to improve the condition of the turf. Traditionally, high-pressure sodium (HPS) fixtures are used. Grass playing surfaces used in sports are designed to withstand high amounts of activity. However, the recuperation of grass is often not fast enough in between matches, resulting in thin patches. Thus additional light is needed. LED lighting is in many ways a proven step forward. A fieldkeeper has more control over growth, resulting in e.g. higher germination rates and faster root/shoot development. Furthermore, LED has many advantages over HPS: lower energy comsumption, longer life span, less heat radiation, and control over the light recipe.

1. What is the result when water cooled LED lights are used to grow high quality grass during the cold seasons of fall and winter in a stadium environment?
2. How can the recovered heat, derived from the water-cooling of the LED lights, effectively be applied on the grass?

The cart contains six ‘Dutch Powerhouse Empress’ LED fixtures, with a combined light intensity of 400 μmol/m2/s on turf level. Water-cooling is powered by a heat exchanger with combined fan and pump in an enclosed system. The fan runs at a low speed.
The trial was conducted during fall and winter between September 2019 and March 2020. During this period grass patches were articifically lighted on a daily basis in 20 hour light periods. The LED lights were used on the parts that received the least amount of sunlight; the corner and goal area at the south side of the stadion.

Redistribution of recovered heat derived from the LED fixtures was first tested using the standard fan speed of the heat exchanger. The fan speed was later set to a lower speed to both increase the emitted temperature and lower the flow rate to an acceptable level.
Results showed that at an environmental temperature of 2°C, grass was heated to 3-4°C under LED lighting. In comparison, HPS lighting had an increase to 4-5°C under similar weather conditions. The root zone was set at a minimum of 7°C with integrated heat pipes.

The grass playing surface illuminated by LED resulted in a consistently faster closing of the turf compared to no additional lighting. The grass growth responded faster to LED lighting, resulting in better field conditions. After a sports match, Erwin has a time period of up to 6 days to return the field into optimal playing conditions. LED lighting therefore improved and accelerated the ability to improve turf conditions. According to Erwin, who before only used HPS lighting, the grass showed
similar growth under LED lighting.

Roots grown under LED lighting grew to a desirable length of 9 centimers deep, resulting in less damage in between matches. This length was half the amount when no lighting was applied. Furthermore, roots illuminated by LED grew healthy white of color with significantly more branches, resulting in faster improved and sturdier field conditions.

Research concluded that LED is an efficient and sustainable option for illuminating stadium grass playing surfaces, while reusing the recovered heat. In the opinion of Erwin Braspenning: The results with LED lighting were comparable with the results of lighting with HPS, in which he has years of experience. Local temperatures showed an increase under LED lighting when heat was applied when using a heat exchanger. Grass and roots grew faster and thicker compared to no lighting. Combined with a lower energy consumption we won’t be surprised to see more LED lighting in stadiums in the future.

Future research will focus on the following:

Erwin Braspenning is an expert fieldkeeper with many years of experience in field maintainance. Hubra Fieldmanagement provides the totale grass care package of NAC Breda. During the trial, Erwin was on site at a weekly basis to assess grass development illuminated by LED. Together with Oreon they further developed the unique stadium grow light system. “We have been able to take major steps with the Oreon LED installation on the main field of NAC Breda. Some of the positive points is the energy consumption and the short lighting periods needed, which gives us a bigger surface coverage compared to the conventional HPS fixtures.”

Read more about the benefits of water cooling